Billy Joel doesn’t know I listen to his music. I don’t think I’ve ever once said to someone of my generation, “Hey, you’ve got to hear this song.” But in reality, some his songs make me stop and take a quick breath. They taste something akin to my memory of red, white, and blue rocket popsicles the ice cream trucks sold in my old Chicago neighborhood. Similar to those popsicles I really don’t seek out anymore,  it’s not until I hear “Piano Man”  or “She’s Got a Way” at random moments in my life that I remember his music affects me at all. But if I really peel back some old memories, I think I once fell in college-love with a stranger who covered “She’s Got a Way” at a local concert in Atlanta one year. Like Hozier says in “Someone New,” I may also tend to whimsically “fall in love just a little while…with someone new” because he or she moves me in some essential way.

My mom and me on the sidewalk near our first Chicago home. 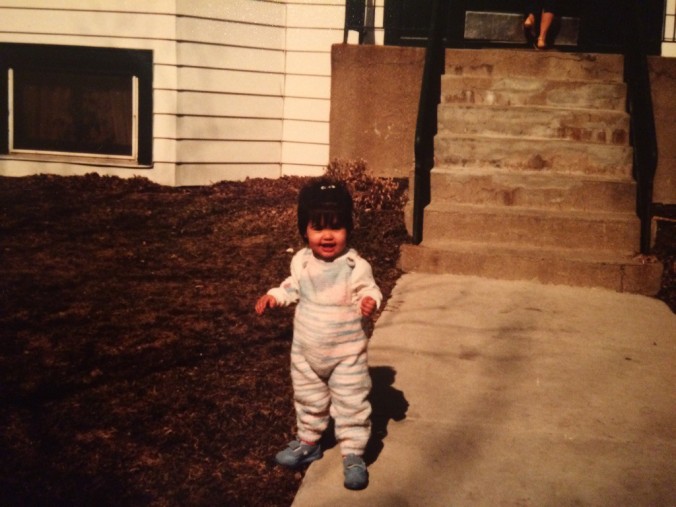 At our front steps

The 80s in an our Chicago home

We were driving around earlier this week and Layla asked me, “Mom, can you play Billy Joel for us?”

A few months ago, a sweet friend told me that she tries to play the classics for her kids because if she doesn’t, where else are they going to hear them? Her kids know The Beatles hits as much as they know the Frozen soundtrack. This got me thinking, and that thought brought me to Monday when I sorted through my music to play Billy Joel for my kids for the first time.

Kids are kids in their new tent.

Two nights later while listening to “The Longest Time” for the tenth time, Zade began bopping his head from side to side. When he asked me who is the singer (a question he models after his sister who is addicted to The Voice and thinks every singer is either Adam Levine or Christina Aguilera), I told him it’s Billy Joel. In the classic 3-year old dramatics, he said, “you always say Billy Joel, mommy.”

Job accomplished, I thought. He’d only heard his music for two days, but maybe I succeeded in planting the sounds, lyrics and tones that once nagged at my heart even though I could not understand why they moved me so, why they left me aching for a time which I certainly hadn’t played a part. A time that sounds like David Letterman’s Late Show theme song, or a lonely man’s thoughts on how life turned out so, or a panorama of sobering independence.

That taste is mixed with a sense I’ve lived a few lives before this one–even if it’s just that my impression of moments and people reduces to a nostalgic sense that I’ve been there before, that I’ve earned the right to participate in conversations as if I’ve felt that, done that, been there, seen that, even if  “I don’t know why it is…” or if I didn’t enter a piano bar until I was in my 20s. I feel I’ve felt people’s pangs since I was a child.

My mom used to sing Abba songs in the living room and dance to them as if she went to clubs in Europe and longed to go back to those days. In reality, my mom married young and her short, unplanned time in Vienna was painful and lonely. Maybe she dreamt of something those songs talked about that she didn’t share, but they were still hers.

I want my kids to know I longed and imagined as much as they will one day, and I, too, want to remember how it was to feel that way in case I lose my connection. Already I want to hug my kids and rub the ache out of them during the eventual time where they think my experiences and longings don’t connect to theirs. If they read these word one day, I hope they remember one of the best closing lines of Fitzgerald’s famous novel: “So we beat on, boats against the current, borne back ceaselessly into the past.” So many of our experiences feel raw and new, but much of what we feel has been felt before; so much of what and how we dream and act is identical to the people before us.

My final note is the most selfish yet gratifying one. We made our sofreh for Persian New Year a few weeks ago as we do traditionally each year, and it was only after I took it down yesterday, after the kids said, “Awwww, where did it go, mama?” that I feel they may remember these days when we colored eggs and picked out decorations. God, it’s such a comfort to see quick results.

Layla and Zade make a sofreh for Persian New Year.

So when I try to expose my kids to music they may not care to seek out later, music I didn’t really know meant something significant to me, and Layla asks me randomly to play a Billy Joel song for her? I relish in the quick results and sing along with the music.